In our latest episode “Evolution”, Elise becomes angry at Charlotte for saying “I didn’t know Betty Buckley was so talented!”

For those of you who don’t know, Mike is a part of another AMAZING podcast “Theater People”. Betty was a guest on their show last year, and we mention that on WCHBW.

Here’s the link to her episode on Theater People.

So on our newest episode where we talk about “Old Dogs New Dicks” , Elise interviews her friend Steven Polito aka Hedda Lettuce aka Brad aka Samantha.

Hedda is currently in Mexico so our phone interview was a little hard to hear. Mike did a great job with the sound and editing but Hedda had a lot of great stuff to say so we wanted to type it out for y’all so you don’t miss the good stuff.

Speaking of good stuff, Hedda is the real deal. A NYC Drag Legend and an amazing person. Do yourselves a favor and follow the Queen of Green.

Now the interview! (..also not going to type out the whole thing, because it’s actually decently clear, BUT I will do all the important behind the scenes stuff).

Elise – So how did you…was this just something your agent got for you, as far as an appointment?

Hedda – It was an audition, I got an audition, and Michael Patrick King…I went to the audition for him. I remember the day, it was very casual, cause Michael Patrick King is kinda just cool. I already knew him peripherally cause two of my friends that I did the theatre company with (John Kinally and Tracy Poust) went on to write for Will and Grace. And Tracy was really good friends with him. I knew him, in a way he knew me, but we didn’t know each other well….at all. So I went to the audition and I think what sealed the deal, because theres a part in the scene where I lift my wig up and say “It’s me, Brad” , I did that in the audition and I think that’s what got me the part….

H – I went in drag. Yea, I went in drag. The ridiculous thing about it is I am playing an ex-hockey player who was straight who was dating her, and at that point I was 800 years younger than she was. But that doesn’t matter, the character Samantha f*cked everything. But I was dating her, and then I am a father of two, and now I work at a drag bingo parlor, and I am not sure if I was gay or still straight, I don’t know exactly what I was but Samantha had made such an impression on my life, she was now my drag inspiration. I tried to look like her.

E – And did you do your own makeup and hair on the show or?

H- I did. I did my own makeup, hair, and I provided the dress. They gave me money for the outfit, which I don’t have. The outfit was really crappily made. I mean I wore it, it lasted the amount of the show, after that it fell apart. It did serve its purpose. I wish I still had it…..

E – So you had that made for the show?

H – Yes, I had it made for the show…and Patricia Field was the costume designer. You know Patricia Field, and she was really cool too! I said “Oh Yea I brought this, and I had it made for this”, and the wig I had just styled and I bought the wig too and surprisingly enough for such a big show, it was kind of very casual in a sense that way. The table read was really interesting, because you have to go for a table read before the shoot so out of drag I went and all the stars were sitting there, and since I hadn’t watched the show regularly I wasn’t like mesmerized. Surprisingly enough, maybe because I was younger I wasn’t really nervous and it was just really interesting to see them all out of character that day, and I do remember Sarah Jessica Parker having really great skin.

They really didn’t pay me any mind. In fact when we finally did the show, I will tell you this with all the turbulent stuff happening between Samantha and Carrie ummm Kim Catrall and Sarah Jessica Parker, I will say I am Team Samantha, because she was the nicest person on the set. I remember having a lovely conversation with her at the food table, at the craft service table, and Miranda was lovely also.

E – Where was that filmed at?

H – It was filmed at on 14th Street at Nell’s..it doesn’t exist anymore. A club called Nell’s. She was one of the original cast members of the Rocky Horror Picture Show she played the tap dancing, Violet?

H – Is that what her name is? She played Magenta.

(EDIT – Steven and I are BOTH wrong here. Nell’s was owned by Nell Campbell who played COLUMBIA. Not Violet or Magenta)

H – She opened up a very popular night club at the time. And so it was filmed there

E – And so do you have any personal feelings on Drag Queen Bingo? Just in general?

If you’re in NYC make sure to catch Hedda! She’ll be performing on Fire Island in Cherry Grove starting Tuesday June 4th (Tuesdays and Sundays) and she’ll be hosting Movie Theatre Night at Village East Cinemas and Cinepolis Chelsea in NYC. Make sure to check out http://www.heddalettuce.com for more info!

Thanks again Steven! We loved talking with you!

So Mike and I realized that we talk about all the “research” we do during the podcast, and wanted to share it all with you guys. We are going to start posting the various links we discover when researching an episode.

Here is some of the cool stuff we found when learning about this episode.

This is the article from Zagat that Mike references. He also wants you all to know that HE KNOWS its Pastis and not PATsis. We all make mistakes Mike, we forgive you.

We were both fascinated to learn about Dina Paisner, the actress who plays Ed’s housekeeper. Here’s a great article about her.

…Donald Trump makes an appearance in this episode, and he decided to give himself a few lines…

So the EPISODES page is fully updated with all of our latest episodes. I (Elise) realized that I have been keeping the Facebook/Instagram/Twitter accounts updated, but have kind of neglected our WEBSITE. Ugh, I am the worst. Well not the worst but, you get it. Anyway, go to the EPISODES page for missed episodes.

Here’s a picture of Mike and Elise at the arcade last night.

Marriage is a Beautiful Journey. 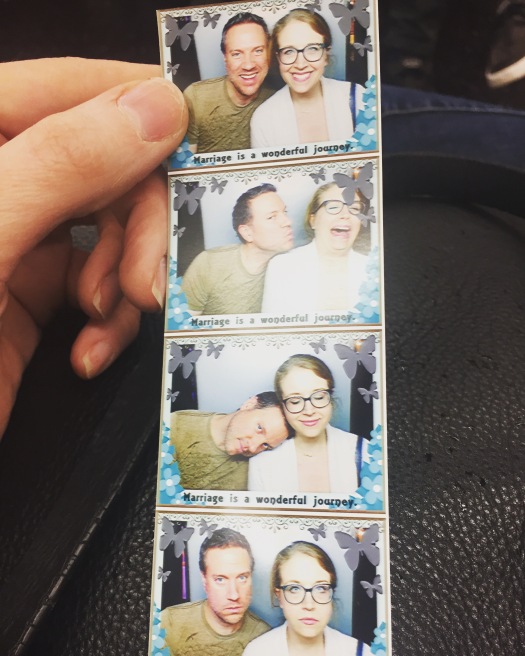 This week we have TWO episodes for you! We have the Season One Finale and our Season One Recap. Elise discovers her favorite line in the entire series, and we are pretty sure Mike discovers he is a Skipper.

Elise and Mike discuss what Mike calls SATC’s first “Very Special Episode”. We are introduced to Laney Berlin, who Mike thinks was robbed of an Emmy Nomination, and Skipper is nowhere to be found!

Mike and I had a GREAT time recording this episode. It made us both laugh and question our own love affair with hot sauce. We really hope you are enjoying this “journey” as much as we are. Thanks for listening and ENJOY!

xoxo Elise “Mrs. UTB” Castle (..it will make sense if you listen to the episode)